What is the Suså river?
The Suså is the longest river on Zealand. The river begins in Tingerup Tykke near Rønnede and ends in Karrebæk Fjord. It’s 83 km long and runs through four municipalities – Faxe, Ringsted, Sorø and Næstved. It also flows through the 8th biggest lake in Denmark – Tystrup Bavelse Sø. It falls by 90 meters on its way through Zealand and drains an area of 1170 km2. The Suså is commonly referred to in two parts, the Upper and Lower Suså. The Upper Suså lies north of the lakes and Lower Suså lies south of the lakes.

A few sections have been selected for improvement, to ensure more life in the Suså river. The efforts made will be related to the physical condition of the river, and to help bring back the Thick Shelled River Mussel. There have previously been many species of fish and mussel in the Suså, which now have gone extinct due to pollution and physical changes in the river. The section between Assendrup and Hjelmsølille in the Upper Suså is one of the sections, where improvements will be made. The other sections are located in the Lower Suså, between Bavelse Sø and Holløse Mølle.

What can be done to the Lower Suså?
The physical conditions in the Lower Suså are a challenge to the mussel and its host fish, as it is for many of the other animals living in this part of the river, partly because they are prevented from migrating up and down the river. The greatest obstacle is dam at Holløse Mølle. The dam has actually created a long lake behind it. This lake is not a good habitat for the fish which normally live in rivers, because these fish need fast running, low level water. Animals living in waterways prefer variation in the river, with areas of fast and slow running water, shallow parts and also hiding places.

How do the dams at Holløse Mølle and Bavelse Sø influence life in the river?
There is a proposal to make some physical changes to the Suså river between Bavelse Sø and Holløse Mølle. These physical changes comprise the complete or partial removal of the dam at Holløse Mølle. Depending on which solution is chosen, a bypass will have to be made, which will equalize the fall over a longer stretch. This will give fish, mussels and small animals a better chance of migrating freely. Gravel will also be laid out in parts of this stretch. This will produce more and better habitats for the river fish along with those host fish that the Thick Shelled River Mussel wants in the river. In turn this creates better living environment for the Thick Shelled River Mussel.

How can a prolonging of either the Suså or Torpe Canal influence river animals?
The work with ensuring more life in the Suså also contains a proposal to prolong either the Suså or Torpe Canal, so that a connection can be made between the Upper and Lower Suså, through Torpe Canal. River animals, especially wandering fish, do not like to, nor are good at, swimming through lakes to reach another river. The get confused when swimming into a lake, if they even dare swim into it. This way, many fish get lost on their way up or down the Suså and the lakes. Most never make it to the Upper Suså or back.

What is a healthy river?
For many years focus has been on improving the condition of the Danish waterways. This can be done in several ways. One can “tweak” three different parameters to create a “healthy” waterway:

How can the river become healthy?
During the past few decades, a significant effort has been made to improve the quality of the water that is led out into the Danish rivers. For many years, wastewater has been led directly to our rivers and streams, without first being treated.  Today, most of the wastewater is either treated in central water treatment facilities or in small decentralized units located on private property. These efforts have had a great impact on the water quality of our rivers.
Efforts have also been made to create good physical conditions for the rivers. Many may know about a river which has been re-meandered, or a dam which has been removed.
Focus has also been on leading back to the river, which was preciously connected to the river.It is important, that rivers have a steady supply of water although the amount will vary depending on the season. 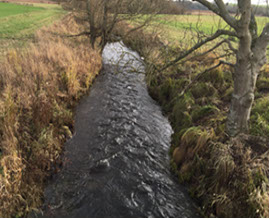